When Helping Hurts: How to Stop the Cycle of Financial Enabling 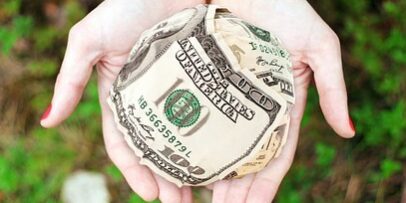 I am thrilled to feature a guest writer, Maureen Kelley, over the next few months.  Maureen Kelley has been a financial advisor, private banker and wealth manager for nearly 30 years. A certified family coach and financial therapist, today she helps people with conversations and challenges beyond the money. With a unique perspective, she writes and blogs, facilitates workshops and retreats, and coaches individuals through their struggles with money. Maureen is a passionate advocate for empowering and engaging women to have healthy relationships with money. For more information visit: www.madreandfamily.com

This week, Maureen tackles a family money issue that I think, advise, and write about a lot.  I’m excited to share her tips to stop the madness of financially enabling your adult children.

At 29, Ryan had racked up $25k in credit card debt.  He had been laid off from his job and had no sense of responsibility when it came to handling money. He stopped making payments on all debts, and his credit score dipped into the low 600s. As a cosigner on Ryan’s loans, Ryan’s father learned about his son’s delinquency (and his own plummeting credit score) and decided it was time to take action.

I have received dozens of phone calls for financial help from desperate baby boomer parents like Ryan’s who are at their wit’s end with their adult child’s financial irresponsibility. They are tired of bailing their children out, paying their bills and debts, and have begun threatening to cut their child off.  In many cases, the young adult is still living at home when they should have launched. Often, the parents wonder how it got so bad and ironically, they may still feel guilty about saying no to a financial request.

What is Financial Enabling?

Financial Enabling is the inability to say no when people continually ask for money.  And where there is an enabler, there is a person who is financially dependent. The latter is defined as the reliance on others for non-work income that creates fear or anxiety of being cut off. In most scenarios, the parent is the enabler and the adult child is the dependent. For the person who has become financially dependent, there can be feelings of anger or resentment related to the non-work income. Parents who are providing the financial support worry about their child’s diminished motivation, passion or drive. Usually, a parent’s financial support is provided with the best of intentions, but it can be quite damaging. In many cases the enabling parent is providing money to the adult child at the expense of their own financial well-being. They may spend down a retirement account or deplete their own assets.

A financially enabling parent might also, unwittingly, support an adult child’s gambling, shopping, drug or alcohol addiction. Additionally, when a child doesn’t have work to get money from their parents, they can become entitled, but their sense of self will also suffer. Managing money should be a basic life skill, and when adult children cannot master that skill, feelings of helplessness and vulnerability can often lead to low grade depression or other mental health problems.

When we have children, we fully support their financial and basic needs. And as they grow, we provide for them whenever they need something, be it clothes, computers, money for school trips—we pay for it. But there comes a time when parents must allow their children to become independent and financially self-sufficient.  When our children are not children anymore, we don’t need to pay to support their lives.

Although Ryan’s parents were extremely frustrated with his choices and behavior, my conversation with Ryan revealed more to the story.  He was very open and emotional as he shared his frustration and resentment toward his parents. Divorced when he was ten years old, he felt that his parents tried to compete and show their love through spending money and buying gifts.

His parents were very successful, bought him whatever he wanted, yet Ryan felt they gave him little in the way of quality time.  Furthermore, he received no financial education, either at home or in school. Instead, Ryan acquired the sense he could have anything he wanted without effort.

After graduating from college, Ryan had no idea how to balance his checking account, but he still had unlimited access to his parent’s credit card. Ryan was a financial train wreck. Although his parents had freely accommodated his financial desires, what Ryan really wanted was time and love.  He was as equally frustrated with the mess that both he and his parents had created.

How to Stop Financial Enabling

The first step to stop financially enabling your adult children is to recognize that your financial help can hurt your child more than help them. Often parents don’t realize that their financial enabling is what causes their child’s financial dependence.

When financial support has become disabling to the child and/or unsustainable for the parent, it is important for it to stop. However, that doesn’t mean your parental support needs to stop.  Instead of freely offering money to your child, you may choose to support him or her by offering career counselling, therapy, financial planning or credit counselling.

Ryan’s parents truly desired to help their son and agreed to share the cost of a professional resume writer and a career coach.  While the process took a few months, Ryan found a job in the industry he had studied in college and is now happily employed.

When you realize it is time for the situation change, rehearse what you are going to say to your child. Acknowledge and own the role that you, as the enabler, have played. Apologize for some of the crippling effects of the enabling behavior. This is also an important time to look inward at your own behavior. You may come to realize that money was a way for you to attempt to control your adult child’s behavior or buy their love—even if you didn’t understand this at the time.  Often there are intense emotions after financial support stops; your adult child may feel guilty, angry, or even stop communicating for a time. The situation didn’t start overnight and will take time to heal.

Mean what you say—and follow through. If you have threatened to cut support for your child but then continue to provide assistance, your child’s dependent behavior will continue because your enabling has continued. In order to be successful, it is important to establish a plan. Set a date that on which your financial aid will end. The process of withdrawing support could be gradual or a complete cessation. For the parent who has been enabling for years, a three to six-month timeline for ending financial support may be easier to handle than an immediate cut off.

As with any family conflict, open and honest communication are necessary. Many families need support in navigating and resolving this entanglement. Seek help from a family or financial therapist when needed.

Ryan’s family engaged in family and individual counselling.  Together, they were able to come up with a plan for debt repayment.  Ryan enrolled in an online financial management class and committed to completing it.   Nearly one year later, Ryan has become financially independent, feels better about himself, and spends meaningful time with his parents. Financial wellbeing is achievable—don’t give up hope.

Money Moves if You are Divorcing
September 23, 2019